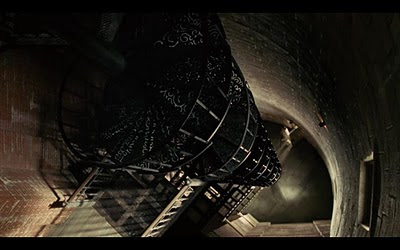 Nolan Versus Polanski in Shot Economy

Jim Emerson elaborates with screenshots on part of a post by AD Jameson about all the ways Inception could be criticized.

Jameson takes, as one example, the first scene of the movie:

...And then we cut inside. (Note the three shots of the kids. Again, Nolan's concern is that we not miss a thing.)

Thirteen shots is a lot of busyness in a scene that doesn't really need it. All Nolan needs to establish at the start of the film is that:
1. Cobb has washed up on a beach.
2. He thinks he sees his kids.
3. An armed guard discovers him.
4. The guard is going to take Cobb to a Japanese mansion also on the beach.

Now, contrast that with the final scene of The Ghost Writer, Roman Polanski's slightly underrated thriller from this past year.

Matt Zoeller Seitz over at Salon chose this scene as one of his top ten scenes of the year and praises it for its economy:

The subject matter of his (Polanski's) movies is often disturbing -- jealousy, insanity, conspiracy, the triumphs of chaos and evil -- but his style is usually conservative, with a touch of elegance. He doesn't cover action with two or three or 10 cameras to produce enough usable footage to create the illusion of comprehensiveness. Polanski more often tries to plan and shoot action from one, maybe two angles, and he doesn't cut to a new angle unless he can get a better result than by staying where he is.

This video that Seitz provides,demonstrates what Polanski accomplishes with only 4 shots. (WARNING HEAVY SPOILER ALERT! THIS IS THE LAST SCENE OF THE FILM)