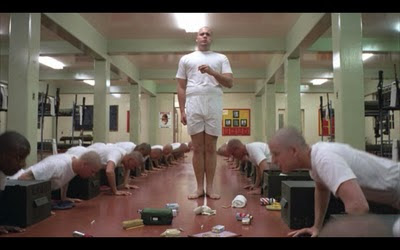 Stanley Kubrick's Full Metal Jacket is often critiqued as being two different movies. The first half is a spartan portrayal of Marine boot camp that ends with a bloody look into to the face of madness. The second half brings several of the players from that fascinating basic training sequence into actual fighting in the cities of Vietnam. The second half climaxes in an assault on a building in which a sniper is pinning down and picking off Marines.

However, there is so much symmetry connecting the first half and the second that it is really hard to separate them.

I thought I would just show one of the image motifs Kubrick enforces in the first half of the film, only to spring it on us in the climax of the second.

There is, of course, the above image which, with the recruits in their white underwear and t-shirts, emphasizes the orderliness of basic training. The exception to the rigor of the shot above is the jelly donut being eaten by Private Pyle, along with the scattered contents of his footlocker - it almost makes literal Pyle's inability to "keep his shit together."

As you will see below, the columns of the barracks are ever present, framing everything confining the viewer and perhaps comforting the recruits? 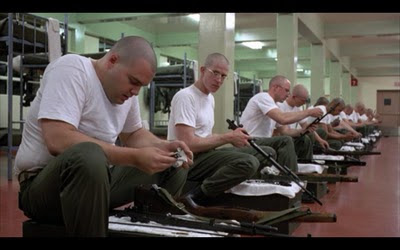 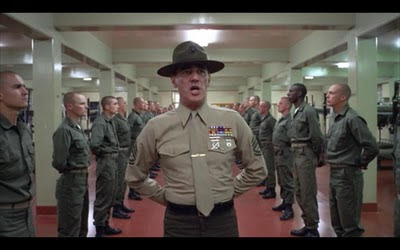 In the shot below, Private Joker(Matthew Modine)approaches the mouth of madness on the platoon's last night in their Parris Island barracks. Lit in moonlight blue, the shot heralds the lunacy that awaits him at the end of the columns. 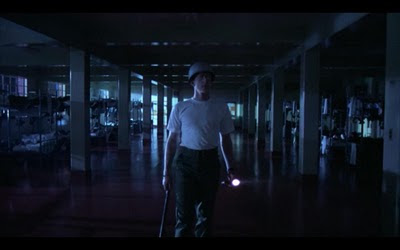 Now, at the end of the second half of the movie, Modine has entered a building and ascended to the top floor where a sniper is known to be hiding. (Remember that during boot camp, the drill instructor praises the marksmanship of Lee Harvey Oswald to the recruits.)

Does anything about the temple-like room below look familiar? There are the columns, awaiting Joker's final approach to the altar, only the orderliness has been been transformed into a vision of hell. 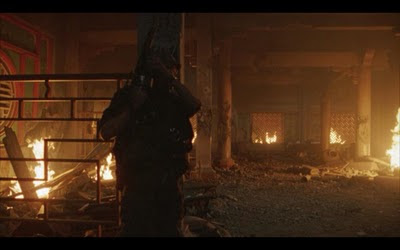 Note how the gating on the left side of the shot somewhat mirrors the steel bunks lining either side of the barracks from the earlier shots.

Great catch, Art - there's always thematic material embedded in Kubrick's production design. Probably 2001 is the apex of that trend, but even in his seemingly "undesigned" movies, there's a lot going on in the background.

Also worth noting that the music composed for Private Pyle's death scene returns for the death of the sniper.

And, of course, that the sniper has killed Private Cowboy, the key tormentor of Private Pyle. By the end of the film, both Pyle's oppressors are dead.

John Wayne, "We're the cowboys, who'll play the Indians?", Texas as place of assassination of JFK and university sniper.