Paranormal Activity - More of the Same - But That's O.K. 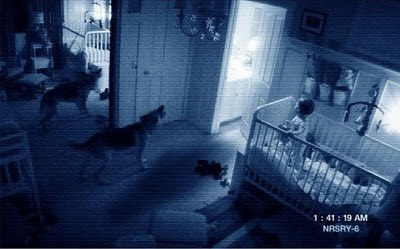 Paranormal Activity 2 is a rare kind of sequel. It is exactly as good as its predecessor. However, this means that while it is no worse, it is also no better.

Well, let me revise that. There is a little tedium that sets in with the second installment because the concept doesn't feel as fresh. They have a found a way to multiply the passive camera effect, but, unfortunately, more angles only produce more of the same after a while.


Some things I found interesting about the writing: (Slight spoilers.)

1. The franchise still hasn't established any sort of clear story rules. We know that this is a demon, but what are its powers? Its operating procedures are very hazy - sometimes it leaves footprints, but other times it seems to float as a vapor?

2. The "prequel" structure of the second movie sets up a third act that may be very difficult for audience members to completely follow if they haven't seen the first movie. Although this could be deliberate - making a kind of interlocking series of stories that rotate around each other.

3. Like the first movie, the characters in the second movie do things that just simply don't make sense. For instance, in this movie, it is weird when one character at a certain point doesn't simply go to a neighbor's house. (Those who have seen the movie will understand.)

Paranormal Activity 2 provides several really good jumps, some minor scares and some very suspenseful moments, but beyond that it is not much. However, if you are looking for that, you pretty much can't go wrong, which may be its appeal.

Many critics are straining to make something out of the upper middle class "mcmansion" setting of both films, but after the second one, I am almost convinced the filmmakers have no real interest in that idea.