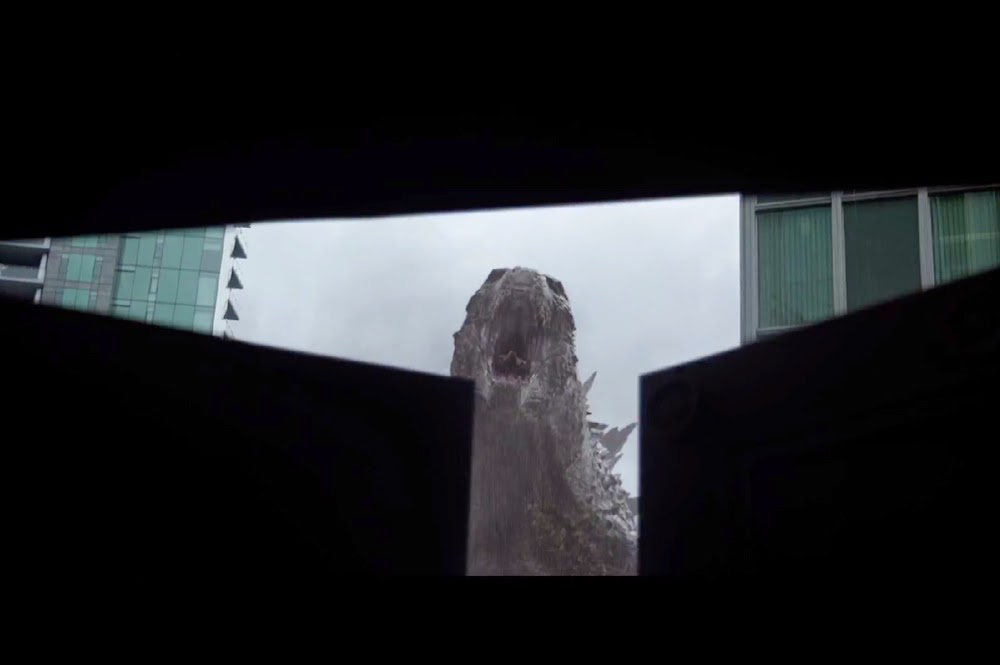 Very late in the newest entry in the Godzilla franchise, the giant titular lizard has leveled half of San Francisco, but finds himself only halfway to his goal of defeating his enemies.   His massive frame, supported by two impossibly large legs, slumps, and his shoulders droop into a fatigued sigh. It's as if he’s moaning, “ whew, how much more of this?"

"I know how you feel, big guy," I wanted to shout at the screen.

This monster action movie takes a long time to get the monsters and then lays on a lot of action  late in the game.

The good news is that moviegoers who have an intense interest in seeing the old fashioned Godzilla fully realized through the best of modern cinematic technology will come away satisfied. The bad news is that anybody looking for almost anything else will most likely walk away shrugging.

The original Godzilla film, made in 1954, was birthed in direct response to incidents involving nuclear weaponry and its effects on the Japanese people.   In director Gareth Edwards new re-imagining, the premise, involving Japanese nuclear reactors, admittedly brings up the shadow of the recent Fukishima disaster, but is tossed into the narrative with less care than a ripped-from-the-headlines Law and Order episode.

Bryan Cranston, fresh off his artistic triumph as Walter White in AMC's series Breaking Bad plays a nuclear scientist living in Japan and running a power plant with his wife played by Juliette Binoche.  Steadily ncreasing tremors trigger a full meltdown and disaster at the plant, but when we flash 15 years forward, it seems that the disaster may have been something else entirely. Cranston's scientist, now a loner and estranged from his only son, is sure that the government, which still keeps a strict quarantine on the area is lying to the public about what really happened.

Guess what? They are! And, like all government operations in these disaster monster movies, there are tens of thousands of personnel involved in these top secret machinations. As these things usually go, the experiments conducted get out of control fast, and soon there is a prehistoric creature on the loose, and it feeds on nuclear material!  This flat-headed, winged creature seems to be a nod to another famous Japanese monster creation Rodan, and it turns out that it isn't alone!

You might notice that in my summation of the plot so far I haven't even mentioned Godzilla. Exactly!  Most of the movie's first half is establishing Godzilla's antagonists, which the U.S. military, in its inimitable fashion, names the M.U.T.O.'s (Massive Unidentified Terrestrial Organisms.) In truth, the military doesn't seem very perturbed. In fact, everybody is pretty calm about this impending titanic clash between a couple of mating MUTOS and now-wakened Godzilla, who seems, for some reason,  incredibly intent on locking horns with these creatures.

Apparently, Godzilla has risen from the depths in response to the presence of the MUTO's , seeing them as worthy prey for his apex predator tastes.  This is all according to a pair of scientists; both are played by the way overqualified duo of Ken Wantanabe and  Sally Hawkins. They explain everything with about as much excitement as the military does. Everything is so matter-of-fact in this film that it is hard for any suspense to materialize.

In trying to follow the classic formula of indirectly revealing the monster over time, a technique popularized by Steven Spielberg's Jaws, the film is infused with aimlessness that even the spectacular destruction of two major U.S. cities can't redeem. I will admit that the filmmaker does get off a shot of genuine irony when Godzilla finally appears full bodied on screen.
But, mostly, we wait.  This is a film in which main characters spend a good amount of time on a Navy ship, following Godzilla's huge spiked back as it cuts a wake at a comfortable speed through the Pacific.  One exception is a suspenseful nighttime mission where two soldiers are trying to evade a lurking MUTO while they maneuver on a high railroad trestle.

Back to the good news, though. Godzilla looks great and moves, well, like a guy in big rubber suit, and I mean that in the best way possible. When the gigantic, and I mean gigantic, reptile is pushing the MUTOs around the city, he seems like a live wrestling bear rather than some sleek CGI creation . He really is a great technical achievement.  It is pretty thrilling to see the infamous Godzilla roar send ripples through his neck muscles. The MUTOs, on the other hand,  look more like the standard issue creatures that seem to inhabit summer blockbusters over the last five or six years, although I do like the way they crack open nuclear missiles and chug the radiation inside like they were a  downing a Red Bull.

All of this technical magic comes later in the movie, (which isn't really that unusual for a monster film,) but what is unusual is the way the human stories are treated so perfunctorily.  Director Gareth Edwards made a small stir with his indie film Monsters back in 2010.  In that film, the creatures also take their time revealing themselves, but there was much more suspense built through the growing connection between the two human protagonists, so that when all hell cuts loose, we're on the edge of our seat.

While Godzilla cuts a fine 3D figure in this updated version, he couldn't care less about the humans underfoot. Now,  that can be excused for a 300 foot prehistoric apex predator, but I’m not sure filmmakers should get the same pass.