James Bond - Dr. No - Minimalist Template for Grandness and Goddesses 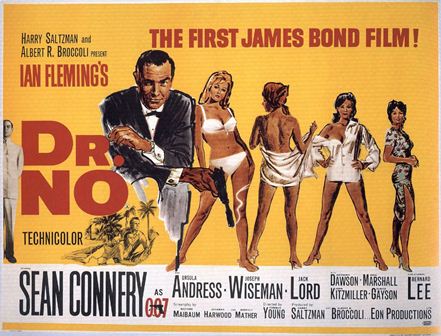 Late in Dr. No, the 1962 spy thriller that introduced moviegoing audiences agent 007, James Bond (Sean Connery) is sneaking through a network of large ventilation shafts, some of which release torrents of water and some of which are extremely hot.  He comes to intersections and he has to make a quick decision to go left or right, up or down.

The scene is almost avant-garde by today’s action standards.  It is wordless, the only sounds are far off rattles and clangs echoing in the shafts.  Bond makes his way through the tunnels and actually into the heart of the command center of Dr. No, who is the villain of this first entry into the film franchise.  The climax of the film starts to ramp up, when, finally, we hear something that has been absent for a long time: the score.

Indeed, this long stretch of the film has proceeded without any music backing it.  Today, we are used to heavy, and sometimes quite good, compositions for action films.  So, it is a little conspicuous to go without it for so long in an action thriller.  However, the editing and the direction come together in a way that definitely builds tension towards the final confrontation.


Aside from the charisma of Sean Connery, which is refreshingly muted in this first outing, the fine editing and workmanlike direction in Dr. No are the key to its success.  David Mamet is famous for saying that, “movies are simply about what happens next.”  Probably no other movies illustrate this point better than the entries in successful series based on Ian Fleming’s spy novels.

Though filmed in Jamaica, this movie seems like it could have been filmed anywhere.  The budget was obviously tight. This wasn’t the Bond juggernaut that we know today.  This was merely an adaptation of a successful set of novels.

The opening is an exception though. The prototype of the Bond titles is there, mostly at the tail end of them. We get an exciting series of circles and patterns through the famous Bond theme, and then a segue into colorful sillohettes dancing to a calypso song. Then we see three blind men walking the streets of Jamaica.  We get the feel of this place, but soon we are thrown into interiors and bungalows that feel like they are shot on the back lot. Exteriors, such as some of the car chases, go along dirt roads that seem as if they could have been in California. 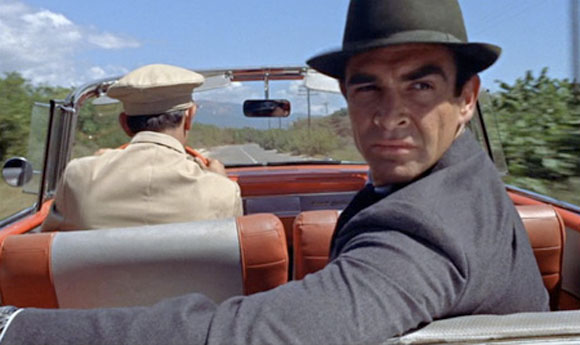 And I won’t even talk about the weird projections behind Connery as he tries to shake a car tailing him.  Actually, I will talk about it.  At times it seems like the car is larger than his by about three times.  It made me laugh out loud. 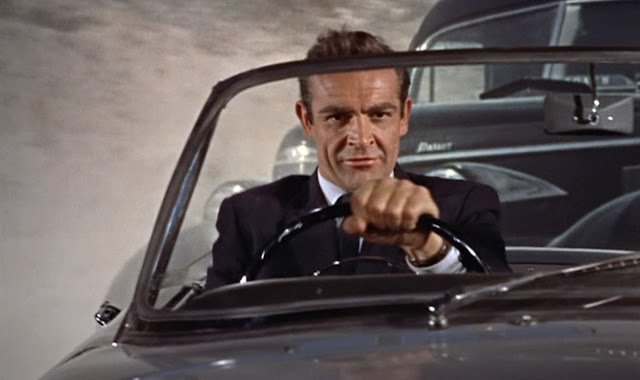 Later, in Dr. No’s underground lair, Bond sees an aquarium with extremely large fish in it. The Doctor informs him that it is a special glass that magnifies them.  I immediately thought they must have used that glass in the car chases. 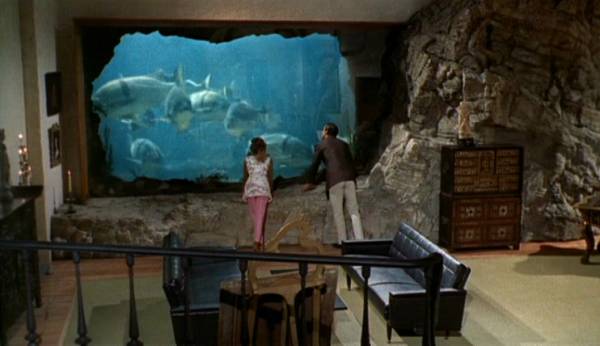 The standard scenes we have come to expect from the first act of Bond films are all here. We get to meet Moneypenney, Q and M. And Bond gets his Walter PPK, but no special gadgets though. In these first scenes, there is an interesting dynamic that I didn't remember from later films in the franchise. Bond is corrected by M. and even threatened, but it doesn’t have the feeling we get in later 007 movies of a winking understanding between both of them that Bond knows better.  Here Bond is an agent, an employee and he has to follow procedures in a bureaucracy.

But make no mistake, this Bond is still smart, or maybe just very clever.  He is usually about one step ahead of the bad guys, although sometimes misses something crucial and is waylaid.  His weakness is women, but he seems pretty good at reading the ones who are treacherous to him, though he has no problem taking them to bed before he dispatches them.

While there are treacherous women, there are also helpful ones. Bond’s good fortune is in meeting Honey Ryder as she emerges from the sea with shells in hand.  The iconic image still works, Ursula Andress is breathtaking.  In a way, she provides enough production value to make up for the anemic visual style…as do the other Bond Girls.

The ladies provide some added sexiness to the rather pedestrian spycraft that is going on in the plot. This Bond spends his time tracking down a lead on a charter fishing boat captain like detectives on Law and Order.   The action is kept to a minimum, and when it happens, there is nothing out of the ordinary, especially if you are looking back on the film with the experience of seeing decades of action films: losing tailing cars on mountain roads, thwarting an attack by a spider, hiding from a search party in the reeds of a river, some light judo.

All of this is done with good pacing and clear direction, although without any real flashy directorial flourishes or artistry.  The sets are trying to be grand, but very apparently hit the budget ceiling early. To compensate for richness and detail they probably couldn't afford, the designers smartly used space.  The interiors have high ceilings, sunken living areas and flow-through layouts. Some even reach a kind of minimalist pinnacle, looking like they should be the set of a Beckett play. (Check out the shot below.) This grandness is something the series continued to develop. 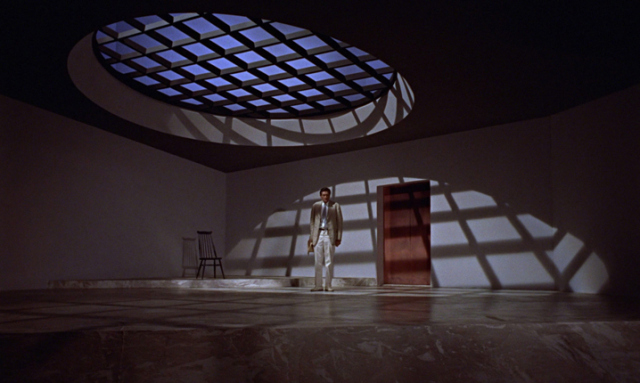 That doesn’t mean the movie doesn’t have some other nice touches.  For instance, Bond stages a trap for a killer with the upbeat song “Under the Mango Tree on the record player, and the song is later reprised in an unexpected way.  In Doctor No’s underground nuclear facility, the captured Bond is treated like a guest at a world class resort, 007 even somewhat approves of the alcohol choices. Connery also delights in delivering little quips about the opposing agents he dispatches, something that reached groan-worthy heights during the Roger Moore era.

This first installment in the Bond franchise stands out because so much of what would come in the series is right there.  It is almost like this is a template for not just the 007 movies, but for action thrillers, especially spy thrillers, for decades to come.  And, yet, it doesn’t feel that way. You do watch with interest and are caught up in the suspense, but you don’t feel like you are seeing anything groundbreaking. You feel like you are watching a decent spy thriller.