Review - House of the Devil 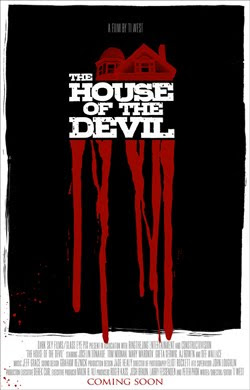 With only a few ironic gestures, writer/director Ti West has created a faithful and fun tribute to a certain era of horror suspense movies, at least for the first half. The House of Devil is an indie marvel in some respects - a genre film adhering to almost every rule in the book, but one that has a little life in its creaky, weathered frame. Like a veteran of late 1970's horror pictures, West shows a workman-like craftsmanship that unfortunately gets the better of him and his characters.

Using minimal exposition, the film establishes an ordinary heroine with ordinary problems. Samantha, a college student suffering from Terrible Roommate Syndrome, has found the perfect off-campus apartment, but she needs to come up with the first month's rent in just a few days.

Pensively striding through the brisk autumn air, she starts looking for fast money by way of the flyers posted on cork boards around the sparsely populated university grounds. The picture is costumed and designed to fit somewhere in the decade between 1975 and 1985, but not in an overly conspicuous way. As much fun as it is to see actresses in their feathered hair, using enormous tape players and headphones, nothing screams out with quotation marks or exclamation points. Rather, the ambiguous feel of time and place works to slow the pace down enough to make the sudden ring of a lonely pay phone startle you. (There's no mobile calling in this town.)

A tear-off flyer advertises a babysitting gig that could be just lucrative enough, but there are also enough red flags to worry Samantha's best friend (Greta Gerwig) who agrees to drive her out to the Ulman house to meet the prospective employers. (The gig is naturally located in an isolated lot adjacent to the cemetery .) The deal is simple. If things are too weird with the arrangement, Samantha will abort the plan and they will leave.

That things will get weird should not be a surprise for anybody watching a film called The House of the Devil, but the neat surprise is not what gets weird, but how it gets weird. Right from the first entrance of Mr. Ulman - the off-beat Tom Noonan as one half of this Wes Craven-meets-Wes Anderson couple - I found myself slightly more engaged than on-guard. Noonan towers over the two young starlets, but his thin, spindly limbs makes you more curious about him than frightened for them. Even more intriguing is his meek and hesitating manner of speaking - he answers over half the girls' questions with a slight smile and a wistful, "Not exactly."

With all this genre preliminary out of the way, the real show will start sometime soon, right? 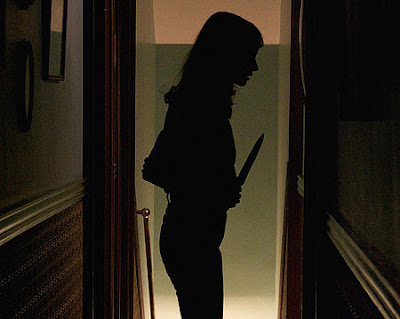 Once Samantha accepts the gig, and the Ulman's depart, a long, extended sequence of scenes commences as the house is explored from top to bottom. The first few instances of Samantha slowly mounting the staircase, staring anxiously at closed doors and dancing around the house with a Sony Walkman attached to her hip blasting the Fixx, are delightfully suspenseful. However, while West certainly gets mileage out of his slow dolly shots and his less-is-more homage to the horror flicks of the 70's and 80's, he also appears unaware that his tension is escaping faster than air from a slashed tire.

The lack of quick-cutting, combined with the eschewing of staple conventions such as "the mirror scare", is refreshing at first, but the filmmaker forgets that the cheap effects he has jettisoned must be replaced with something more than just atmosphere. Without any added clues, or even misdirection, the film moves quickly towards inertia. What started off as anticipation and fear, degenerates into waiting and restlessness. The climax, a gorefest, strangely tries to make a quick shift into Dario Argento territory and almost falls on its face.

To be fair, even the best of the films The House of the Devil is mimicking did little more than generate an uneasy feeling. Come to think of it, they were best savored on the late-night television rotation. Let's Scare Jessica Death and others like it were enjoyably creepy concoctions when consumed on the tube at 11 o'clock, but their powers waned in the light of day. Rosemary's Baby might be considered the pinnacle of this class of horror movie, but there is a steep decline after it.

Labels: Greta Gerwig, Horror, Review, The House of the Devil